Bankman-Fried negative then positive on bitcoin as a payments network

in Bitcoin Spotlight
by Laurie Dunn

Entrepreneur, CEO and founder of cryptocurrency exchange FTX, Sam Bankman-Fried, said yesterday that bitcoin could not become a payments network but that it had potential for being a store of value. Has he changed his mind on the former?

The young exchange CEO gave his thoughts on bitcoin in an interview with the Financial Times yesterday. He argued that the biggest of the cryptocurrencies did not have a system that was conducive to handling the kind of demand that a payments network would have to cope with.

“The bitcoin network is not a payments network and it is not a scaling network.”

He stated that bitcoin’s proof-of-work system would not be able to scale in order to keep pace with demand.

Visa claims to have the fastest transaction speeds of any other payments network, at 24,000 transactions per second. However, according to Bitcoin.com, Visa rarely handles above 1,700 TPS.

It can be argued one way or another about the bitcoin network’s suitability for payments, but one thing that can’t be denied, is that bitcoin is becoming a real competitor to gold as a store of value.

Bankman-Fried followed up on Twitter over his remarks about bitcoin not being a payments network. He clarified that he had in fact praised bitcoin for its potential to be a store of value. 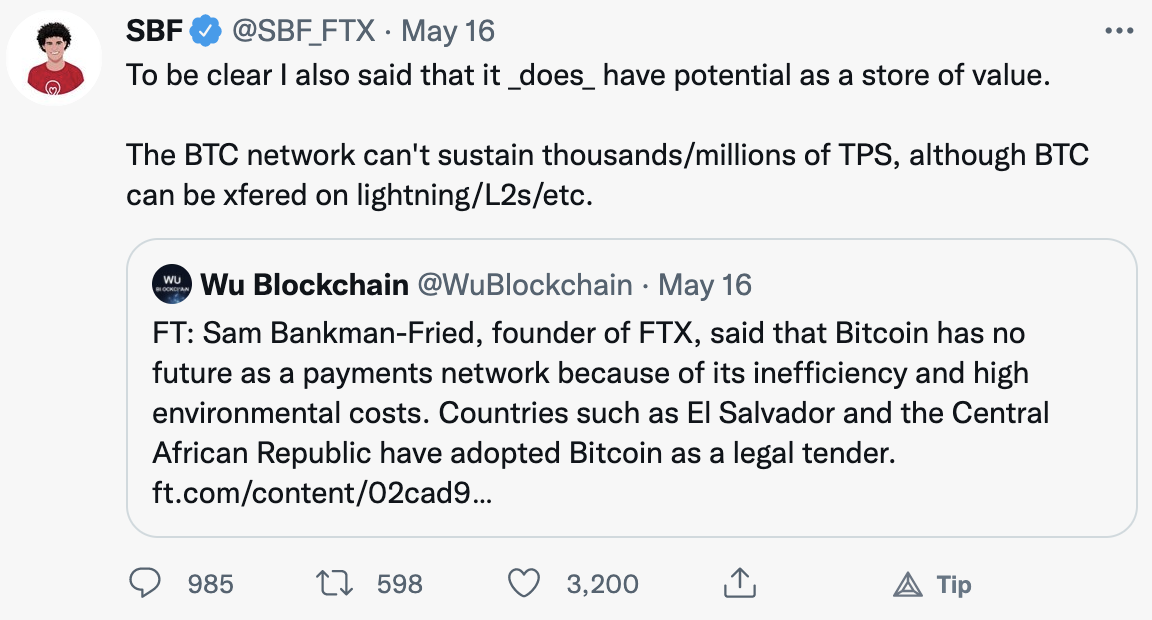 Despite the negativity that SBF has shown towards bitcoin’s perceived lack of ability to be a payments network, more recent discussions with the likes of Jack Dorsey and others on the viability of the lightning network, has led SBF to a bit of a rethink on the subject …

Total convert to crypto and blockchain. As a content writer I research and write about various projects in the cryptoverse.